Our congratulations to Professor Katherine Ibbett, whose book Compassion’s Edge: Fellow-Feeling and its Limits in Early Modern France has been awarded the Society for Renaissance Studies Book Prize 2018. The prize is given biannually to encourage original research on any aspect in the field of Renaissance studies and to recognise significant accomplishments by members of the Society.

Professor Katherine Ibbett with her book, photographed in the Lodge of Trinity College, Oxford. November 14th, 2017. (The image has been previously published on Professor Ibbett’s Twitter channel.) 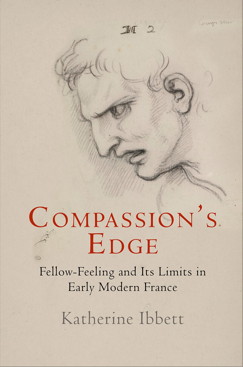 Professor Ibbett’s book was the unanimous winner because of its brilliant interdisciplinary range and relevance.

Katherine Ibbett provides an illuminating and sophisticated discussion of the meaning and limits of compassion in France between the Edict of Nantes in 1589 and its Revocation in 1685. She traces the divisions and separations which were invoked by compassion in this original work, which is both reflective and rigorous. She illustrates vividly that compassion was one way in which social dynamics of inclusion and exclusion could be expressed and reinforced.

Through a focus on the feeling, rather than on charitable activities presumed to be motivated by such a sentiment, she provides a new interpretation of how early modern communities negotiated the difficult terrain of toleration and co-existence in the aftermath of Europe’s Reformations. Looking in particular through the lens of gender, she provides a fresh interpretation of a wide variety of texts (including plays, pamphlets, novels, dictionaries and moral philosophy).

This book promises to inspire fresh scholarship in early modern French history, the history of emotions and Renaissance Studies.

Compassion’s Edge: Fellow-Feeling and its Limits in Early Modern France was published by the University of Pennsylvania Press in 2018; please, see the publisher’s webpage for more information about the title.

In a decision that reflects the nature and ethics of her research, Professor Ibbett will be donating her SRS award to charity, splitting the prize between refugee support in the Mediterranean region and on the Mexican border. We applaud Professor Ibbett’s decision, and hope that Compassion’s Edge continues to encourage both research and ‘fellow-feeling’. 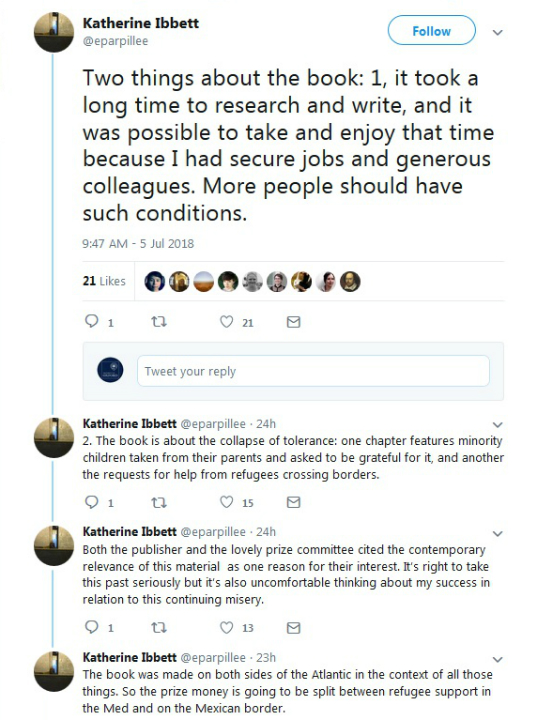 Screenshot of Katherine Ibbett’s tweets; you can follow her @eparpillee.