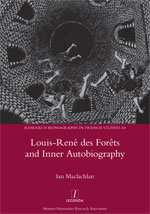 Congratulations to Professor Ian Maclachlan on the publication of his new book Louis-René des Forêts and Inner Autobiography, an exploration of the wider resonances of des Forêts’ later works.

Professor Maclachlan says: ‘I’ve long been interested in unusual forms of autobiographical writing, of which Louis-René des Forêts (1916–2000) provides a striking example, moving between different genres as he weaves oblique, almost impersonal lines of a life. He was also a remarkable stylist in both prose and verse.’